So, how are you all doing in this lockdown situation? Anyone developed cabin fever yet?
I hear you. While I’m lucky that I’m able to continue my day job, and this working from home situation actually works well for me, the fact that I can’t just jump in the car and go somewhere to take photos of landscapes, is beginning to get annoying. At the same time, work is still keeping me busy enough that I don’t actually have any more time than normal to dedicate to photography. But! I recently discovered that I can combine the two, thanks to a bunch of robins and blue tits in my garden.

With my other half working in my study, I have set myself up with a little home office in the living room. Sitting on the sofa seemed a great idea to start with, though I’m beginning to feel the downside of this arrangement in my back and shoulders.
But hey, who cares when you have birds performing priceless comedy right outside your living room door!

I had a bird feeder hanging on a hook on the side of the house for some time, but there was never much interest. Until lockdown started. Suddenly I had two blue tits making the garden their own, and dashing around between flower bed and bird feeder. They were also decimating my mint plants, but let’s not mention this..
And after a few days, a robin, and later two robins were becoming regular visitors. I was quite excited actually, especially now that I was sitting in a perfect spot to watch them.

But why stop there! Time to get the camera. But of course, I didn’t want to spook the birds by jumping up to go and get my photo gear every time they were in the garden. So I ended up keeping the camera with 100-400mm lens attached next to me on the sofa at all times. Switched on, of course, always ready to shoot.

It took some time for me to figure out the birds’ habits and quirks. The blue tits, for example, usually turned up together, first visiting the feeder, then flying to the end of the garden into the hedge, before returning via the mint plant, back to the feeder, before they flew off again. The robins on the other hand, seemingly couldn’t quite figure out how to land on the short bars of the feeding tube, so they took to flying up to it, flapping around, and dropping to the ground. After a quick hop onto a garden chair, eyeing up the feeder from down below, they again flew up to it, flapping in front of it like hummingbirds, picking at the openings to grab a seed or two, before diving back to the ground. I initially thought they were trying to knock the feeder to make some seeds fall to the ground, but eventually they worked out a landing strategy and fed from the tube.

Initially most of the images I took during the first few days turned out either blurred or our of focus.. Hey, what do you expect from a landscape photographer! I take photos of things that don’t move – and when they do, I actually want the motion blur. So this turned out to be quite some learning curve – and, credit to Mark, he actually provided some really useful insight and tips into how to set my camera.

Once I had this all figured out, and also noticed that the robins had a habit of “announcing” their arrival with two sharp and short calls, I got what I was after. I especially wanted to capture the “hummingbird” move which I found so fascinating. But also the blue tits, which are SO fast and their movements quite erratic at times were captured nice and sharp with the new settings. I just never managed to get them in flight. They operated way more stealthily than the robins! 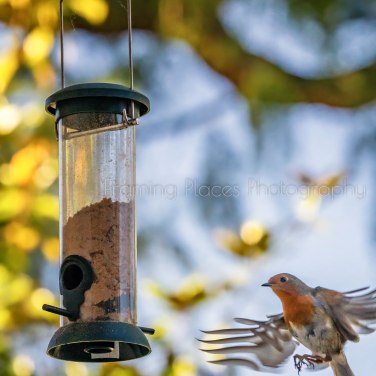 So for a week or two, I’ve been busy capturing these little birds, which not only brightened up my days, but also gave me something else to do and think about than work, work, work.
I might just treat them to some nicer bird feed, and maybe a second feeder with some mealyworms for the robins especially.

Though I first have to figure out how to get rid of those wood pigeon bullies who keep trying to get to the feeder as well. Obviously failing miserably, but they seem stupid enough to not understand that they’re just too fat to land on the bars, with heads too large to fit into the feeding holes.
I guess every species has their share of idiots 😉

View all posts by framing-places