Another New Year’s Day, another sunrise. This is now a firm tradition in this household, and yet again it was a pretty special morning.

Since sunrise through the keyhole at Durdle Door was such a spectacular and special way to start 2019, we thought we had to try to do at least something similarly crazy to kick off 2020. New York offers a variety of options of course, but we were yet again drawn to the coast – this time Jones Beach Island.

Before I get into the madness of the day trip itself, a quick word on car rentals in New York City. When presented with an upgrade on the very sensible vehicle option you booked, it is perfectly ok to turn it down and ask for the originally booked class of car…
Instead of the Rav4-size 4×4 we reserved, we ended up with a humongous Infinity QX80. And because of the holiday opening times, we had to pick up the car in Midtown at lunch time on December 31st, even though we were not planning to leave the city until 4am on New Year’s Day. Parking this kind of Beast on the mean streets of Manhattan (or even getting it out of the underground parking garage of the rental place) is not easy. We know that now 😉

Anyway, so since we thought there wouldn’t be a fireworks display in Manhattan (also wrong, by the way..), we watched the London Fireworks online and went to bed early – only to be woken up by an onslaught of bangs and flashes of light lasting 30 minutes. Not only did my little mind assume we were under attack, it left me literally on the ceiling with my heart racing, unable to get back to sleep. Great. That was a waste of an early night..

Thankfully Mark sleeps through anything, so he was wide awake and ready to go when our alarms went off in the early hours. Cameras and supplies for the day packed, we were on our way. First stop: Fire Island lighthouse, a roughly 90 minute drive from the city.

Well, it was out intended destination anyway.
Unfortunately, Fire Ireland is a State Park, so we didn’t even manage to get close to any of the car parks near the lighthouse. And thanks to the monster truck of a rental car, we had no chance of sneaking through the barriers and parking (hiding) the car in a hedge.
By the time we realised our plan wasn’t going to materialise, the sky was starting to lighten up and turn a lovely purple colour along the horizon. We knew we needed an alternative location fast, or we’ll miss sunrise.

So back on the main road, we headed West and turned into the first car park along the ocean front that looked open. That was Jones Beach. Famous with the Asian community it seemed, as half of China was already there (they too, had all been upgraded to monster trucks by the looks of it) and cooking their breakfast on camping stoves, strategically set up amongst the many cars. Those who had already finished were streaming to the beach. My idea of romantic sunrise on an empty beach was destroyed right there.

Anyway, we were there, the sun was rising fast, so we bundled up, grabbed our stuff, and strut out onto the beach to find a spot where chances of people photo-bombing our shots were minimal.

The wind was absolutely freezing, the waves were crashing, and my eyes and nose were streaming because of the cold wind. I love being by the sea. Really. It’s good for you 😉

Sunrise was somewhat uninspiring that morning. Although, thinking about it, it probably wasn’t the sunrise itself that was the problem, but the fact that the location was somewhat restrictive and not overly exciting to frame. Even though the clouds did look pretty cool, they were constantly threatening to ruin sunrise altogether, as they were moving in thick and fast.

After maybe an hour or so on the beach, we decided it was time to move on. We had another goal that morning, which was to be even more frustrating than getting to the lighthouse for sunrise…

Mark had been following the daily updates on a local wildlife spotters website, which had reported sightings of a snowy owl on a beach near us! So obviously, we had to go and find it. Sounds simple, right? Umm…no. But we weren’t the only ones trying our luck.
As we arrived at the location that promised to deliver this elusive sighting, a few other photographers and bird watchers turned up.
To say I had lens envy doesn’t even begin to cover it! My little 100-400mm f4.5-5.6 lens was dwarfed by some monster glass some of these other guys had on the front of their cameras.. At this point, I wasn’t holding out much hope that even if we were to find the owl, it would probably be way too far away for my lens to capture it as anything other than a white blob in the far distance. 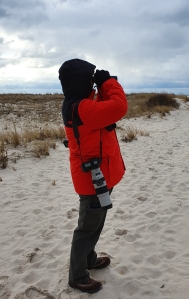 So, how do you go looking for a snowy owl anyway, I hear you ask. Well, for a start, you need to know where to start your quest (check). Then you need a decent pair of binoculars (check), sturdy walking boots and a quiet and stealthy walk (check), plain clothing (oops) and good eyes (umm….).
I lost count how many times we mistook a variety of white non-living items as snowy owls. Plastic bags, the surf from the crashing sea, a piece of cloth – though maybe the latter was the snowy owl surrendering? Or maybe not..
It seemed impossible. I mean, you’re looking for a well-camouflaged bird in surroundings of a very plain colours. It’s not going to go well at the best of times. But we persisted. We must have walked 10 miles that morning, which on sand is hard work! The owl(s) were nowhere to be seen, no matter how hard we looked and tried.

But instead, we were treated to a fun little murmuration of a flock of dunlins. There must have been thousands of them! These little birds were mostly running around on the ground near the shore, but every now and then they concerted a short flight a few metres along the beach. They were hilarious to watch, and we must have spent a good hour or so amongst the birds. They did not at all seem phased by our presence. 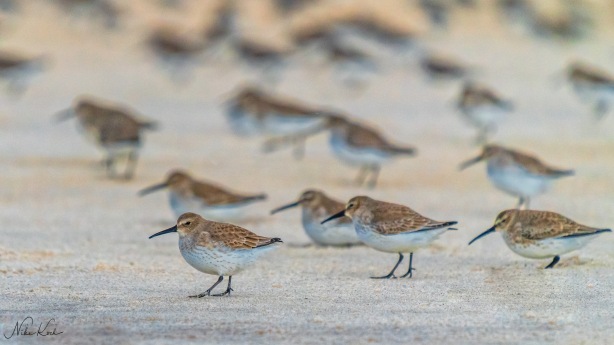 Alas, we were not so lucky to find the owl, but we had a fantastic and exciting morning nevertheless. It was time to go home and recover.

View all posts by framing-places